We are a non-partisan, grassroots, non-profit organization of politically diverse North Carolinians working to bring more representative elections to our state by advocating for Ranked Choice Voting (RCV).

There's a lot wrong with elections in NC today.

Winning only requires 30% of the votes.  With our current "winner take all" voting system, a candidate can be declared the winner even if 70% of the voters preferred someone else.

We often vote for the most electable candidate instead of our favorite.  Fearing our vote will be a "spoiler" and elect an undesired candidate, we let strategy guide our vote (instead of our conscience).

We hold costly and low-turnout run-off elections.  If no candidate earns 30% of the votes, tax-payers are required to fund a second (run-off) election and return to the polls for their final vote to count.

Also known as "Instant Runoff Voting", RCV is a simple and easy upgrade to the voting system that ensures the winning candidate has true majority support.  To achieve this, voters have the choice to rank the candidates.  Ranked Choice Voting is as easy as 1, 2, 3!  Learn how RCV works with this short overview using a fun dinner-time example:

RCV is easy to use!  We rank things all of the time.  Instead of food or colors, voters have the choice to rank candidates in order of preference: one, two, three (and so on). 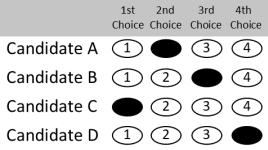 RCV ensures true majority winners!  The will of the people prevails because the majority (greater than 50%) of voters always determines the election winner.

RCV saves tax-payer money!  We avoid having to administer costly and low-turnout run-off elections (ranked voter preferences were obtained the first time around).

RCV gives voters more power!  Your preference is always heard. If your 1st choice candidate can't win, your vote counts toward your 2nd choice instead (and so on). 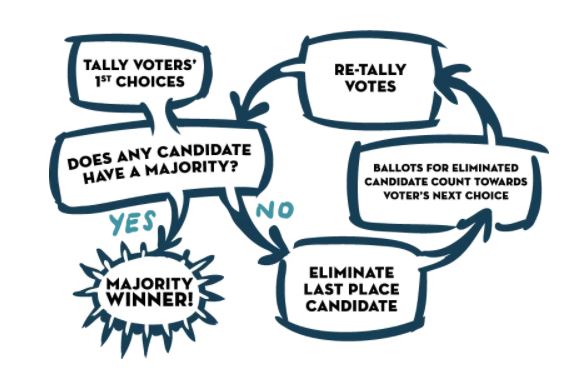 Learn more about why Ranked Choice Voting is a better voting system.